I found The Bloggess shortly after I started blogging in 2009. I was looking around this online world to see if it was a venue for me that would benefit my writing. I wanted to see what established bloggers posted.

Jenny Lawson as The Bloggess was wild, ribald, and ridiculous. I was hooked on her voice and in awe of her persona. Her topics are cringe worthy reading that produce guffaws more than snickers, and dozens to hundreds of comments by her followers were almost as good as the posts. I seldom made a comment as I couldn’t add to or improve on anything already in the threads.

Two years ago I featured her and her memoir in the Author Marketing 101 article on nonfiction personas.  Last year I featured Let’s Pretend This Never Happened on my blog.  In April this year, I shared her Bravery by any other name  post on Facebook.

So it was a really big deal for me to spend hours at the Powell’s Jenny Lawson event last night, it’s been on my calendar for months. I would be there no matter what life tossed in my way. And it was Great! A true Fan Girl experience.  And I have the picture to prove it! 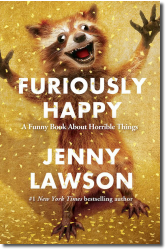 However, as much as I admire Jenny as an author and businesswoman, it was meeting her fans that made the biggest impact on me. The event was standing-room-only and the floor roped off, as at the capacity limit, for hours. Jenny’s fans are real people with personal, emotional, and physical challenges who suffer with depression, disorders, phobias and manias. Now they have an example of how to step out of the shadows and help themselves and each other. Through Jenny’s authenticity and humor they have a voice, an advocate who tells it like it is! Jenny’s fans are also the counselors, friends and family who are helping dissolve the mental illness stigma.

There’s a wonderful speech on You Tube as Jenny accepts the “2014 NoStigmas Hero Award” (via skype) on behalf of everyone who shares the battle to be “Furiously Happy” in spite of horrible things.

4 thoughts on “I met The Bloggess”

Thanks for your comments. Cancel reply